Abram the Safety Ape will salute
the great simians of Hollywood
at the Bubblegum Awards.
See Friday.

FRIDAY, October 7
October is International Bubblegum Month. Let us now bow before all things sugary, joyful, underappreciated and one-hit-wonderful with the Bubblegum Achievement Awards, brought to us by the fun-pushers from Scram magazine. The awards go to Steve Barri (Grass Roots string puller, producer of the all-chimp band Lancelot Link & the Evolution Revolution), Ron Dante (the Archies), Joey Levine (Ohio Express) and Dr. Demento, who needs no parenthetical. Besides sweet acceptance speeches, there will be a screening of the new documentary Bubblegum Music Is the Naked Truth, live performances by Dante, the Bubblegum Queen and Canned Hamm, a special puppet spectacular created by marionette master Bob Baker, and a visit from Abram the Safety Ape, plus cake, ice cream, Bazooka bubblegum, raffle prizes, oddly hip and hiply odd people. My candidate for next year: the Buoys, the Rupert Holmes-led band who recorded “Timothy,” the peppiest song about eating your friend ever recorded. Bob Baker Marionette Theater, 1345 W. First St.; Fri., Oct. 7, 7 p.m.; $52. (323) 223-2767.

Girls of Santa Monica, beware! If a dark-skinned man in his late 20s, dressed in frayed workman’s clothing, should approach you, run away, lest you suffer the terrible fate of Lillian Dominguez, 15, or the slightly less terrible fate of Barbara Jean Morse, 14.

Lillian of course is the schoolgirl victim of an unknown fiend, murdered Wednesday as she walked home from a school dance at Garfield Elementary with two classmates. A man approached the girls at 17th Street and Michigan Avenue, and did something to Lillian. She cried, “That man touched me! I can’t see,” and collapsed with a fatal wound to her heart muscle.

Now Barbara Jean Morse has come forward with a similar tale of being approached a month ago while walking through an alley one morning near her home at 343 Euclid and, she thought, struck by a strange man. She ran away, and only on arriving home covered in blood and in pain was it discovered she had been stabbed by a stiletto-type weapon.

Police remain baffled as to the motive or the perpetrator of these sadistic crimes.

My natural inclination to make some sardonic aside (the girls were killed in self-defense, say)-but as girls, like dogs, are innocents, I wish them not to come to harm. Therefore, in short:

17th and Michigan, where Lillian Dominquez met her end: And the alley behind Barbara Morseâ€™s home on Euclid: James Harry Hoxworth, 40, has a pretty good idea who’s messing with his wife Violet–family friend Harold E. Ward, also 40. Why, they’re out in a car together right now!

James and his shotgun waited at the Hoxworth home at 1143-B Junipero Ave., and when Harold and Violet pulled up, James jammed the barrel through the car window and blew a fatal hole in Harold’s chest. Then he yanked Violet out the passenger door and beat her soundly.

When police arrived, they found a note inside the home, scrawled in crayon, in which James accused Violet of infidelity.

Accused of stabbing the Major in their home at 1423 13th Street, San Pedro on July 1, 1941, Mrs. Tucker’s trial was to commence on December 8, 1941. The attack on Pearl Harbor intervened, and the many military witnesses to the case were scattered across the globe. Lawyers Jerry Giesler and Frank P. Doherty recently moved to dismiss the indictment, as witnesses remain at their distant posts. Assistant D.A. John Barnes didn’t fight them, so Superior Judge Thomas L. Ambrose set Mrs. Tucker, who has been out on bail, permanently free.

When arrested, Mrs. Tucker said that her husband’s wound, from which he died after 10 days, was an accident. It seems he’d been making a ham sandwich after a wild party, and somehow the butcher knife pierced his spleen, stomach and heart. The knife ended up in the back of a utility drawer. Although the stabbing happened on civilian property, no one called the police, and Major Tucker was flown by bomber up to San Francisco for two rounds of emergency surgery, while fellow officers hustled around collecting evidence from the scene.

These kinds of things happen when you cook drunk, so be careful out there! 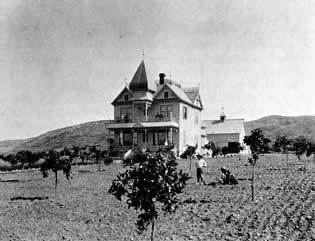 When Long Beach evangelist Dr. Charles E. Fuller was born, to Henry and Helen Day Fuller, 60 years ago at 255 S. Hill Street, birth certificates were not recorded. So when he sought to obtain a passport for a European revival tour, some clever proof was necessary to satify the pencil pushers. In Superior Judge Harold B. Jeffrey’s court today, he fervently hoped that a photograph of the infant Fuller taken at a studio at 41 S. Main would be sufficient. (at left, Fuller’s childhood home)

Not a lot of turret nâ€™ gabled childhood homes of anybody down Hill between 2nd and 3rd anymore. Nope, not many at all. Thereâ€™s hills behind there somewhere.

41 South Main is right about where that first tree stands. The area isnâ€™t exactly chockablock full of dag and tintype studios anymore, either. Charles Edward Thompson, 37, and wife Gladys separated recently, with Charles allowed a weekly visit with 6-month-old baby Barbara. Yesterday Charles, who has been living at 1105 W. 29th Street, drove to the female Thompsons’ residence at 737 Brice Road, El Monte, and the family went to L.A. so Barbara could visit her doctor. Words were exchanged on the ride home, and Charles made to split with the kid. He failed in this, and the trio returned to El Monte, where Gladys walked the groceries into the house at Charles’ directive. She’d not even reached the door when she heard two shots.

Charles expired at Temple City Emergency and Barbara followed her father in death at General Hospital soon after.

Chuck showed Gladys a thing-or two. Wonder if Gladys planted those trees as saplings in front of her new subdivision. Which grew up as grim, dim monuments to the dead, overshadowing and darkening the home.