1947-a lot of women-killing, a lot of booze. Itâ€™s enough to turn one into a teetotaling sub. Almost.

And here, a woman killing herself. With booze. Nowadays, her family would call up A&E and sheâ€™d be on Intervention. Perfect fodder for the show-someone: somewhere once, nowhere now. Our identified family member has hit bottom. Get them into treatment. God, give me the strength to blame those who did this to me, to accuse those who didnâ€™t, and the wisdom to know the difference…a lifetime of coffee, cigarettes and forced clapping after each and every utterance.

Evelyn Winters was described as â€œbrilliantâ€ by those who knew her, a legal eagle for the studio system since she was 23, til her alcholism caught up with her and she was shitcanned from the film colony at 37. Was there sensitivity training in the workplace for those who still suffer? This is 1947. The only place youâ€™ll be happy, joyous and free is in the afterlife. For more information about alcohol, ask a parent or teacher! Or go here.

The elephant in the copy room went to the elephant graveyard: skid row. Where does a homeless 800-lb. gorilla sleep? Anywhere it can. And so forth. 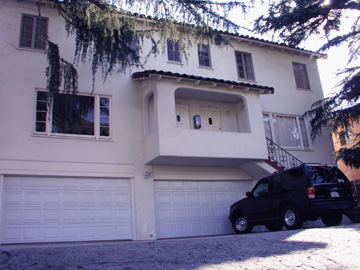 But in the months prior to her assault and murder she had been living in the beer parlors on Hill and Figueroa, keeping what was left of her belongings in a liquor store.

She was out carousing, divorced, jobless, though with, Iâ€™d wager, a mind still keen and ticking, before she was found nearly nude, beaten, and dragged for some way, near the Ducommun Street railroad right-of-way, here: 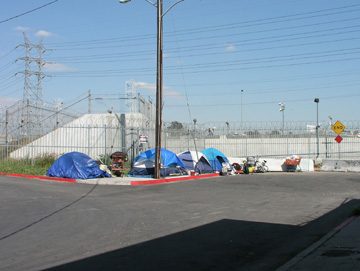 Evelyn, homeless, now has a homeless encampment on her site.

So, then thereâ€™s this Tiernan character. 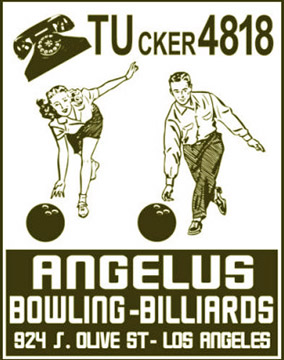 which is now a parking lot: 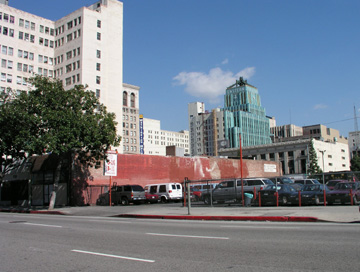 The Albany, where she may have had her last drink, or did not, is gone: 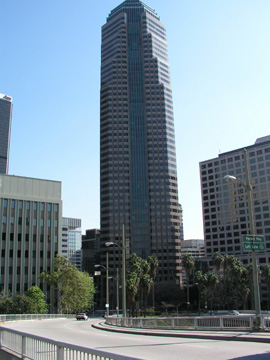 Never did find a vintage image of the Albany-some flavor of the wiped-out neighborhood-one block west: 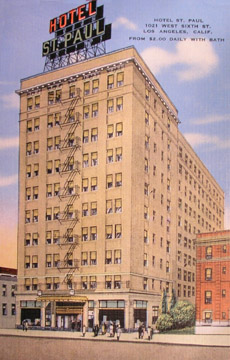 And one block east: 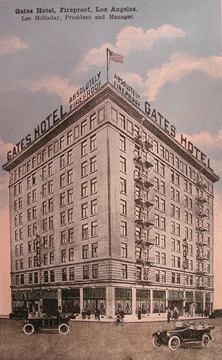 But why the hotel room? We donâ€™t know. Tiernan didnâ€™t live at the Albany. He lived at the Armondale, at 728 South Flower. 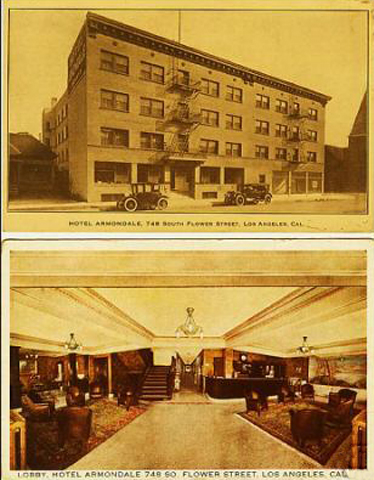 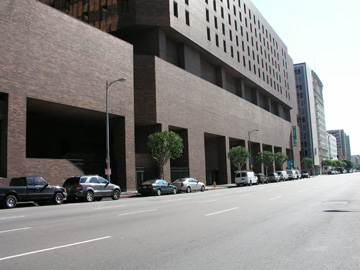 First off, what, already, is up with the Armondale Hotel? It has that â€œbuilt on Indian burial groundâ€ cachet that money canâ€™t buy. Perhaps it was simply built over one of those giant magnets. The kind that attract neâ€™er-do-wells.

The place had trouble attached from the get-go. Dale Carleton, developer and proprietor of the spanking-new 1914 Armondale, is sued by wifey Marie for a sizable share of his $250,000 net worth. Mrs. Carleton names a Ms. Helen Williams-Armondale telephone girl whose duties apparently went above and beyond the working of switchboard-as correspondent.

1919. Wilbert Garrison, 28, son of a wealthy publisher in New York, drove across country with a buddy and they holed up in the Armondale. A week later Wilbert left in his room his money, valuables, and a note indicating that he did not want to be a burden on others, and as such was ending his life. Despite the best efforts of the Nick Harris detective agency (who calls the cops in 1919?), Wilbert is never found.

1939. Washed-up boxer Louis Menney, 22, Armondale resident, is tackled by a priest after he sexually assaulted a 62 year-old woman in a church at 9th (now James M. Woods) and Green. Turns out heâ€™d-moletsed? raped?-the papers will only mention â€œmorals offensesâ€-a nine year-old in the church as well. Moreover, heâ€™d done his business with a six year-old girl on the corner of 11th (now Chick Hearn) and Georgia, and also kidnapped and robbed an Agnes M—– and sexually assaulted a Margaret L—– in a church on West Adams; since the kidnapping charge is death penalty territory, we can only hope the Armondaleâ€™s most famous resident ended up in the proper hands. 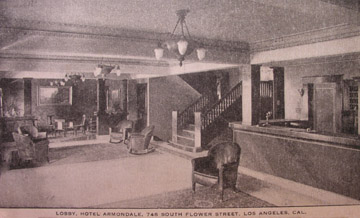 1948. Francis Sylvester, of the Armondale, works across the street at the Western Union at 741 South Flower. Sylvester wires untold sums in care of himself to small outlying towns, where there are no Western Union offices, and destroys the records of the transactions.

And 1965. Percy Hatch, 65, who had been in the hotel since 1957, started talking crazy-talk. As in, a loggorhea of obscenities for two straight weeks. Behind the Armondale registration desk was manager Nancy Furlow, 62, who, finally fed up with her repeated warnings, reached for the phone, and was shot dead by Hatch with one bullet. Hatch therewith turned the gun on himself.

Shortly thereafter the Armondale was felled and a rather ill-advised Broadway was built on the site. Now a Macyâ€™s, it resembles a Dawn mall on a slow day. For more on this exercise in brown, please go here.

Tiernan had been reading with Evelyn at Central Library for a couple years. They would read, or shack up and drink, and maybe he’d talk bowling and maybe she’d talk law, but probably not. Neither he nor anyone else was ever charged.

And so goes the final post of 1947. Soon there will be another liquor-infused ladykilling, and another, and Evelyn will be forgotten by all but her mother and best barfly pals and her killer, and God willing, she will become part of us.