So Officer Putman escorts the former wife of a fellow officer home at 1:30am. Shoots her, throws the gun on the lawn.

An accident. When I have an accident, I’ve usually just cut my finger opening a can.

Again with the stucco and window job. Why is it people stucco? It’s applied via inherent sloth. They’re told you’ll “never paint again — painting looks bad in twenty years!” So they have chicken-wire stapled to their craftsman shingle and swimming pool gunnite shot the hell on their houses. It looks like shit when it’s sprayed on and it looks just as shitty twenty years later. If that isn’t cultural progress, I don’t know what is.

According to Mrs. Jean McCool of the newly-incorporated American charity Orphans, Inc., 450 abandoned babies are living in terrible conditions in local orphanages where there is little or no milk, food, medicines, linens or clothes for the infants. More than half of the foundlings are the illegitimate children of American servicemen.

On March 19, after his third grade classes at Allesandro School, 9-year-old Murl Duncan Cooke, Jr. failed to return to the home he shared at 2910 Gilroy Avenue with brother Newton, 10, and their widowed mother Pearl.

Since then, the boy has been sleeping rough, eating whatever people gave him. Juvenile Officers W.B. Smith and J.W. Scheck finally spotted the kid huddling in a liquor store doorway near where Beverly meets Vermont last night, and brought him into Georgia Street juvenile division for a big slice of banana cream pie and a warm cot.

Why was little Murl alone on the street? The next morning, he told officers, “I ran away once before. I didn’t go home till after 8 o’clock and I got a whippin’ for it. That’s why I didn’t want to go home this time.” He was returned to his mother’s care.

Christ in the desert never had such a forbidding landscape. Here we are spending all this money on schools, and we can’t even afford some decent plantings for wandering kids to sleep in. Giant rocks and cacti? Nice. Let’s plant some damn cushy ivy! It’s for the kids! If you hate ivy, YOU HATE CHILDREN!!!

The aforementioned liquor store may have been located in the brick building on the right. As for Gilroy Avenue, that disappeared completely. The child-beating evil that was Mrs. Pearl Cooke evidently sucked the whole street into Hell.

Fanned by high winds, a two-alarm fire that started today on the kitchen roof of the Melody Lane Cafe (5351 Wilshire Blvd.) spread to five other businesses and did extensive damage to their second stories. Affected were the storerooms of the Pig ‘n Whistle candy and pastry shop (5353), Randall Optomotrist (5355), McKlernan’s Fashions (5357), Horton & Converse Pharmacy (5359) and Staber’s Beauty Salon (5361). Fire Captain Noble Swanson suffered back injuries and abrasions when a section of roof collapsed, and damages to McKlernan’s store alone were estimated by owner M. J. McKlernan at $30,000, despite rubber blankets laid down by firemen.

I couldn’t go shoot the Melody Lane building now. It’s a tough part of the world to visit. Can’t bear the destruction of Clements’ Mullen & Bluett. The loftivization of Desmond’s. The open pit that is Coulter’s.

Developers in cahoots with the Miracle Mile Association delight in tearing down original Modern strutures and replacing them with faux-Miami-Deco. What gives?

A shot of the Mile in happier times, despite the flames that lay in wait for the Melody Lane.

Det. Sgt. J.A. DiBetta and Officers Paul Stevens and Joe Aguirre state that they observed a group inside a home at 504 N. Westmoreland Ave., among them Betty Thomas, 19, a model, who was seen injecting fluid into her arm. At this point, the officers entered the home, where they arrested Thomas, Sherry Kenton (23, phone operator, Riverside), Roman Mapili (51, 504 N. Westmoreland Ave.), Theodorico Mangosing (38, 821 Thayer Ave.), Cleto Edwarte (45, 439 N. Lake Ave.) and Felix Benigno (39, a transient). Taken into evidence were assorted narcotics and accessories, among them heroin with syrettes, amytal, nembutal and unidentified pills.

Following her arrest, Miss Kenton became hysterical, threatened suicide, and managed to slash her left wrist with her compact mirror before being restrained. Perhaps she was worried she would lose her phone operator gig if news of the arrest made the papers. 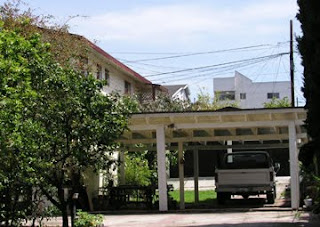 504 is pretty well off the street; Betty must have assumed she was beyond the prying eyes of the clap-shoulders. A gal & her pal “shooting fluid” in the wee hours with four men twice their age? Couldn’t it have been one of the wild Hollywood insulin parties so whispered about? Those diabetics and their hysteria.

Betty Thomas’ last known address. Her murphy bed and corner sink soon replaced by spa tub and skylight. Stuff that, as the slums of the future, won’t last nearly as long.

His head swathed in bandages, Robles heard testimony from his mother-in-law, Mrs. Mary Doolan, 128 1/2 W. 43rd Place, who stated that she left her home for a few minutes on that date, and returned to find her daughter dead in the bedroom.

“A few minutes later some police officers came to the house and said that Hermenegildo had shot himself,” she said. “I took them into the bedroom and said, ‘He shot her, too.'”

After shooting his wife, with whom he had quarreled about money, and from whom he had been separated for two weeks, Robles boarded a streetcar outside the home, alighting at St. Agnes’ Church at the corner of Vermont and Adams. After praying, Robles stood on the steps of the church, pulled out a .32 caliber revolver, and shot himself beneath the chin.

Officers said that they had found scribbled notes in Spanish in Robles’ pockets in which he confessed to the crime and asked forgiveness. The suspect was taken to General Hospital, and on regaining consciousness arrested.

The house where Guillermina met her end:

I know what you’re saying. At least her untimely demise spared an unborn child from ever having to see this fake brick.

The streetcar line no longer goes to a church on Vermont and Adams. Please attempt penance, and suicide, elsewhere.