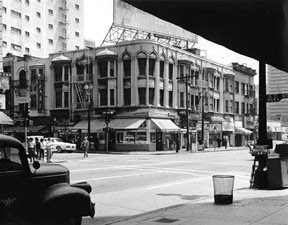 This funny little building was the oldest remaining structure fronting Pershing Square when it was unceremoniously demolished. It’s too bad — it’s a first-rate little commercial block with a sorta restrained but sexy Jugendstijl air.

Pershing Square was sexy once, too. In 1947 it had a grand fountain and unbelievably lush vegetation and Communists bickering with one another. Sure, all that got torn out in the 1950s, but at least they replanted foliage and laid pathways. Thanks to Ricardo Legoretta and Laurie Olin, the late-80s cultural terrorists, Pershing Square is now justifiably known as the Worst Public Space in America.

Career footpad Ray Mathews, 28, 417 S. Boylston St., made the mistake of plying his trade too close to home, when he was observed early today riffling the purse of his across the hall neighbor, Mrs. Harry Schwerberg.

The lady yelled, which alerted another neighbor, Kenneth Craig, who shot Mathews as he tried to flee the building. Mathews then returned to his own apartment, leaving again by way of a ladder out the window. Responding officers found the wounded man hiding in a hedge, and conveyed him to the Georgia Street Receiving Hospital, where he was booked on suspicion of robberies in San Francisco. Also taken into custody was a .45 caliber revolver, allegedly tossed aside by Mathews.

A guard’s gate marks the entrance to the 400 block of South Boylston. Where once there stood an apartment building, one can now, should they be so inclined, shoot a recreation of the shooting on this soundstage.

Los Angeles Center Studios demo’d the block and rebuilt, even taking over the amazing diamond-shaped 1958 Union Oil Center by Pereira & Luckman seen in the background. Bill and Chuck gazed upon on the remnants of 1947 Los Angeles and envisioned glistening new world of aluminum louvers, glass walls and gleaming terrazzo lobbies. Get thee inside and bask in the Future!

In coordinated raids on five South Los Angeles nightclubs tonight, police officers held hundreds of patrons while taking down names and addresses. There were 12 felony arrests and 30 for misdemeanor offences.

Assistant Chief of Police Joseph Reed, director of the operation, told reporters “This is the first in a new attempt to break up the breeding places of crime. The results show that it will be worthwhile for us to continue the raids.”

The area’s nightclubs gained some notoriety earlier this month, when conductor Otto Klemperer met two Negroes in a jazz club and accepted their offer of a personal tour of the Central Avenue music scene. His adventure ended when the men slugged him, stole his wallet and threw him out of their car at 48th Street and Compton Avenue. 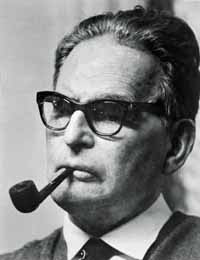 The first club to be raided was the Casa Blanca (2801 S. San Pedro St.), one of the spots on Klemperer’s pre-assault itinerary. At the Casa Blanca, reputed owner Stanley W. Morgan (33, 4300 S. Main Street) was taken into custody after police found marihuana in a room to which he had a key. When the Cafe Society (2711 S. San Pedro St.) was rousted, an enraged patron threw a glass at police and photographers. The largest crowd was held by police here, as they checked more than 200 IDs to determine if any minors were in attendance. Other clubs raided include Club Joy (4505 S. Avalon Blvd.), Cafe Zombie (5434 S. Central Ave.) and Lovejoy’s (4416 3/4 South Central Ave.).

Among those arrested were Eugene Burnett (21, 105 S. San Pedro St.); Joseph Adolphus Lewis (36, 1335 E. Adams Blvd.) and Mrs. Sandra M. Langston (19, 1735 E. Gage Ave.). Burnett was held on suspicion of assault with a deadly weapon for the shooting of officers Dean Bergman and Roy Phelps on March 17. Lewis and Langston were booked on narcotics offenses, musician Lewis after police found marihuana in his guitar case.

Some of the buildings survive. None of the clubs do. 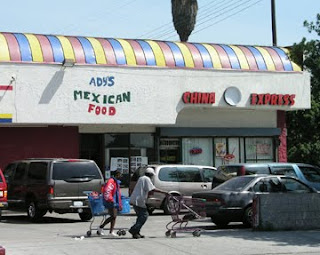 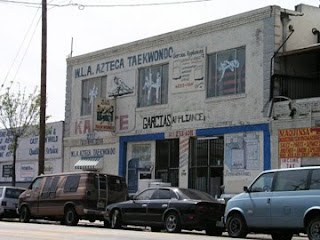 When Dorothy Evelyn Burks, 25, eloped to Las Vegas with C. Earl Stoner, automobile distributor, it came as an unhappy surprise to her former admirer, Andrew Norman, 60, cosmetics manufacturer. What about the love tokens with which he had showered the young lady–the home at 348 Homewood Road, Brentwood Heights (valued at $75,000), or the square-cut emerald and diamond “engagement” ring ($25,000)?

Six months after the Burks-Stoner nuptials, the unhappy Norman brought suit against the lady, charging that her “false professions of love” made him a helpless victim of “female arts.”

Through her attorney, Hugh B. Rotchford, Mrs. Stoner denied that she was ever engaged to Norman, stated that the gifts were granted “freely and voluntarily” from “a shrewd and experienced businessman of mature years; a man of the world.” Furthermore, she noted, Norman has since confirmed her title to the Brentwood Heights home, in which she and her new husband are residing.

Century-Old Eucalyptus to Be Felled in Encino

Tree surgeon Joseph M. Varela spent the day cutting limbs from a 120-foot tall Eucalyptus tree at the corner of Ventura Blvd. and Petit Ave., on the old Rancho Amestoy. The hundred-year-old tree, one of the oldest in the San Fernando Valley, must fall to make way for the widening of Ventura Blvd. through Encino.

Curious about the lack of traffic at the Melrose / La Brea blockade, police investigated and found Thomas A. Reeves, 23, of 1200 S. Windsor Blvd., standing at the corner of Melrose and Rossmore Aves. holding a sign reading ROAD BLOCK AT MELROSE AND LA BREA.

While being booked at City Jail for public drunkenness, our hero reported that someone had given him a dollar to hold the sign. Meanwhile, Police claimed success for their campaign, noting that only one robbery was reported citywide, as opposed to eight or nine for a typical Tuesday night.

Lendell Leydecker was horrified today to discover the crucified body of a tan dog along a railroad siding west of the Fernando Milling Company. The dog was stretched belly-down between the rails, its feet and mouth nailed to the ties with three-inch nails. Across the animal’s back was an iron bar, with which it had apparently been beaten.

Sheriff’s deputies from the Lancaster Substation were baffled, their only clue coming from a watchman at a nearby pipe yard who reported seeing a “chunky” boy in his early teens walking along the tracks the previous afternoon. With him was a dog similar to the one found dead.

A-Bomb Doom to Hang Over Bikini For Decades Today in New York, Col. Stafford Warren, M.D., chief of medical and radiological safety of last summer’s Crossroads Operation, now Dean of the UCLA Medical School, predicted that Bikini Lagoon and its twenty islands should remain depopulated for decades, at the very least, until radiation returns to safe levels.