“Here, kitty kitty!” was the song of Millwood Avenue as the neighborhood joined in urging pussycat Middy to alight from her perch, 75 feet up in a palm near her home at number 750.

After six days, Middy’s mistress Mrs. Don Bowser was at her wit’s end, her throat raw and neck sore from craning. Although the fire department declined to assist, Boy Scouts from Venice Troop 75 milled around looking helpful. And perhaps the sight of all those little boys so plump and perfect for scratching did compel Middy to move, for suddenly the recalcitrant cat crashed down through the dry fronds, claws out and howling, and landed on the concrete below.

A neighbor reported that Middy had drunk a little milk, and would be examined by a vet because she’d shown signs of internal bleeding.

This is too damn suspicious. Sure, go ahead and argue it’s likely there’s some sort of giant feline-bolixing lodestone under Venice sending cats up trees, or a scientist shooting suicidal brainwaves to the pussy population…tell yourself anything you want…but the disturbing fact remains that the last time we blogged about a cat leaping from a tree, it was one block away.

My instinct tells me there is something of the treacherous cat intelligence at work here-there are independent agents of the feline flying corps across Los Angeles (cf. our post of August 9) but to set up an actual base of operations? They are grouping-planning… plotting…waiting…there’re 75,000 Mexican Fan and Canary Island date palms in Los Angeles, and probably as many of these beasts-prepare for the sky-darkening clowder of carnivorous cats! Daniel Baccarat, 50-year-old liquor store proprietor until recently serving customers at 211 W. Ninth Street is on the run after City Health Inspectors discovered that the possibly infectious leper was working with the public. An attorney who called the Health Department to inquire if a warrant had been issued for Baccarat’s arrest rang off the line when asked if he represented the man or knew where he was hiding.

Baccarat first received treatment at the National Leprosarium in Carville, Louisiana in 1928, and in 1931 was discharged as an arrested case. But four years later, San Francisco physicians discovered his disease had recurred and he was forced into hospital treatment. When he volunteered to return to Carville, Baccarat was freed… and somehow turned up in San Pedro twelve years later.

If found, Baccarat will be taken to General Hospital to be examined by Leon Griest, Chief Quarantine Officer of the City Health Department, but he can only be shipped back to Louisiana if he agrees to go.

The liquor store is now a parking lot. Of course it is. It had to be burned. It had LEPROSY!!! 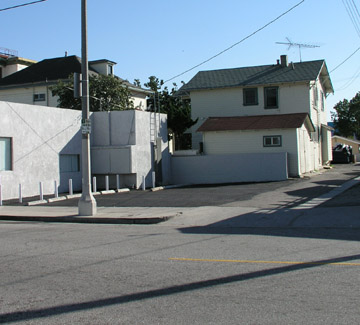 I can see Baccarat now. His mottled porcelain white-skin. The nasal ulcers. The eyebrows falling off. “You want the pint or the fifth?” His cytokines and activated macrophages raising all manner of lesion and nodule-“your change, sir!”

Ah, leprosy. That most biblical of afflictions. We think of leprosy, ahem, Hansenâ€™s, as some sort of Medieval/pirate-themed/Third World typa deal, but remember, American citizens so diseased didnâ€™t win the right to vote until 1946. Dan had probably been hauled off to Carville in shackles and under armed guard, as many a leper was, while outside the walls kids in catechism class were learning the palindromatically helpful Repel evil as a live leper. (I like to think said wisdom is still so imparted.) Heck, the Japanese still excecuted the children of lepers through the 1950s.

To Carville’s credit, it was there in the 1940s scientists discovered sulfones could cure leprosy…though it wasn’t until the late ’90s that long-term residents were given the choice of leaving. Forty of them remained. Home is home.

In the excitement of leading the Crime Bus tour, we inadvertently neglected to blog one of the stories that, when first reading the 1947 papers with an eye to writing a book ten years ago, made it obvious that I’d stumbled onto a very interesting shadow L.A. And so we bring you, twelve days late, The Hotfoot That Slipped Through The Cracks.

Thomas Gant, 40, and Thurman Dawson, 27, were prank pals–acquaintances who took great pleasure in torturing each other with increasingly annoying shenanigans. For the past week their activities had been constant and aggressive, with the agonies of the hotfoot featuring prominently in each man’s arsenal.

And so might it have continued, until all the shoes both owned were singed, but still wearable, had Dawson not been inspired to add a squirt of lighter fluid to yesterday’s performance. Gant said, “Enough already” (after he shrieked like a girl), and sought the aid of the homicide cops near City Hall. They looked at his scorched shoe, laughed and wished him well in his endeavors.

Furious, Gant strode back to the hotel where he and Dawson lived, at 236 E. Second Street, and retrieved a gun. From there, he went to the cafe at 245 E. Second and found Dawson at his afternoon meal. Gant shot Dawson in the gut, killing him, and awaited the arrival of the homicide cops, who obliged by taking him more seriously this time around.

Jack Gillette, 68-year-old aircraft worker, was called into Judge Thurlow T. Taft’s courtroom today to answer a charge of firing, without provocation, a miniature gun of his own manufacture at the lower body of Venice cabbie Jack Stewart, 29. The bullet, half the size of a .22, left a nasty bruise on the younger man’s hip. Gillette declared that he had merely wanted to see if his invention worked. Judge Taft looked over the seven teeny guns that police had seized and set bail for the incorrigible oldster at $1000.

Harry Babasin, 25, was just sitting down to a chess game with William Haller, 24, when all heck broke loose. Sixteen State and L.A.P.D. Narcotics officers busted into the large home at 5751 Tuxedo Terrace and placed the whole joint under arrest. In addition to Babasin, a member of Benny Goodman’s band, and Haller, late of Freddie Slack’s outfit, this included Nelson Shelledy, 28, formerly of Charlie Barnett’s orchestra, and Haller’s lady friend Mrs. Bonaline Stewart, 30, a secretary.

Siezed in the raid was $500 worth of primo gage (aka maryjuana), of which Mrs. Stewart groused, “I’m just a victim of circumstance. I went there on a date with Bill Haller. I was downstairs when I heard all the commotion. What will my boss think, and my family?”

They’ll think that you’re an older woman who hangs around jazzbos, doll. And we at 47project think you’re a-okay!

I donâ€™t get the Hollywood Hills. Itâ€™s cramped, thereâ€™s nowhere to park, and every time you run out of liquor itâ€™s twenty arduous minutes to the store. But I suppose thatâ€™s the price you pay for privacy. 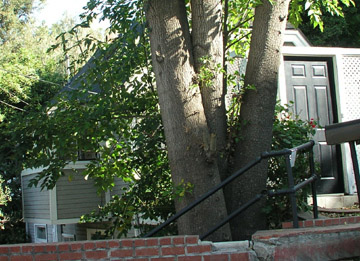 -and it is an impressive three-story structure- 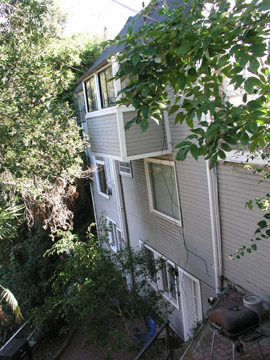 -but that sixteen narcos would wind there way up there to bust some tea-blowing agony piper, that puts me off the Hills for good.

Grizzled mariners are baffled by the mysterious development of a perfect lover’s knot in the anchor chain of the Navy oiler U.S.S. Caliente. When anchor was dropped in 9 fathoms of water, the chain hung perfectly straight–but when they went to move her into dry dock, the knot made it impossible to weigh anchor.

Sailors cut the knot with torches and moved the ship on her way. The mermaids giggled, and the gremlins guffawed.

Oh, joyful day! But when the Santa Monica registry office refused to issue a marriage license due to the bride’s Chinese heritage, the couple had to roam as far east as Albuquerque, where a call from director King Vidor succeeded in urging clerk May Cleghorn to stay open late to issue the Jagger-Ling license. A handy justice of the peace performed the ceremony in the lobby of the Bernalillo County Clerk’s office, and the happy kids were free to return to Tinseltown, married in the eyes of God and Albuquerque, but outsiders in their home.