Mrs. Kenny Platt, 820 Millwood Ave., was at her wit’s end. Her beloved black pussycat Midnight had been up a 35′ palm tree for the past week, and she just had to get him back before the witching hour.

Calling together three tree trimmers armed with ladders and some kindly neighbors to hold out a taut blanket to catch the kitty’s fall, Mrs. Platt made a concerted assault on the feline’s stronghold.

Alarmed by all the activity, Midnight made a mightly lunge, scaring the blanket holders, who ducked. Midnight landed safely on the street, was scooped up by his mistress, and enjoyed a big bowl of milk.

Still catching up on his jet lag following a Congressional fact-finding tour of post war Europe, Representative Richard M. Nixon is beaming after receiving a Good Government Award from the Junior Chamber of Commerce at a dinner in his honor last week.

At a luncheon meeting in Whittier earlier that day, Nixon quipped, “If we lose the battle for democracy in Europe, we can consider it lost at home.”

It’s ant season, which means it’s that time of year when little kids find and gobble up big gooey handfuls of honey-like ant poison and end up in hospitals getting their little tummies pumped.

Two terrified families raced their babies into Georgia Street Receiving Hospital within an hour of each other, each complaining of ant paste ingestion. 19-month-old Janet Aiken of 1511 W. 99th Street and 10-month-old Cheryl Mayo of 3028 W. 36th are both doing fine after treatment.

Parents: lock up that ant paste!

On Sunday, when the Army transport ship Joseph V. Connolly eased into New York Harbor bearing its sad cargo of more than 6000 U.S. war dead, a car veered off the road in Los Angeles and struck a tree, leaving three people dead.

Among the accident victims: Andrea M. Hernandez, 22, of 1217 West 257th Street, Harbor City. On the transport ship: the remains of her husband, Private Pete A. Hernandez, previously intered in Belgium. 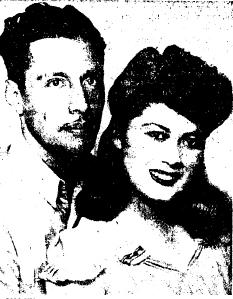 Some months back, retired aircraft worker Pietro Bresciani, 60, made a large loan to Jack Elmer States, laundry operator of 955 Luder Ave., El Monte. The money was not forthcoming. So Bresciani purchased a big-game rifle and asked States over to his house at 132 E. Ann Street. As States approached, Bresciani shot through the screen door, and his debtor fell dead on the steps.

Premediatated enough for you? Bresciani even had some $50 bills on hand to give out to passersby as he waited for police… unless he took them from States’ wallet. Did the dead man finally pay that debt? In any case, after reenacting the shooting for the cops, Bresciani was taken to jail.

And looky here, a reappearance of the William Mead Homes, last seen on 47project July 8 as a corner near the Rosenda Mondragon dump. Hereâ€™s the doorway where Bresciani blasted States the Launderer through the screen. The screen is gone, of course, having been replaced by a steel security door. Had Wm. Mead had those then, States might have fared better. The first reports of strange behavior by Howard Burbank, 57-year-old San Fernando Valley real estate man, came when he was pulled off a Chicago-bound bus after trying to choke a fellow passenger, William Ross of Cleveland. Following a police investigation, Burbank was freed.

Later today he stashed his clothing in a parked car, and ran naked down the street. Perhaps that’s considered normal behavior in the San Fernando Valley, but not in Elkhart in October! So a passing driver knocked him down, and cops took him to the jail at Goshen, where it took four strong men to get a pair of pants onto him.

Assistant City Attorney Donald M. Redwine questioned the bear hunters and the honey-keeper, and implied Henry had a right to protect his investment. The case is being held under advisement.

Actor Lionel Stander and wife Jehanne blew the whistle on landlords Howard and Bertha Kline in the court of Superior Judge Robert H. Scott, refuting the Kline’s claims of default in the purchase of the home at 605 S. Plymouth Blvd. and seeking to remain in residence.

The Standers assert that while they signed a $65,000 purchase agreement for the property, this was part of a hustle allowing the Klines to avoid registering the residence with the Office of Price Administration. They claim the two couples had a private, oral agreement that the Standers would pay $600 per month in rent, although the cap should have been set at $200. The hearing will continue tomorrow.

Do not mess with Lionel Stander. The gravel-voiced six feet of iron from the Bvonx was Red-blooded, as in an unapologetic ideologue for Uncle Joe, and told HUAC tâ€™go fuck themselves to boot. In 1947 he landed a bit part in Call Northside 777 but by â€™51 was soundly blacklisted and didnâ€™t see the business end of a camera again â€˜til the early 60s.

After having stirred the masses, he ended up as chauffeur for Jonathan and Jennifer Hart. Like to think he was cogitating on proletarian uprising as he tooled the bosses around. On the other hand, had he become a starveling of slumber? Those Rolls seats are pretty cushy, yâ€™know.

The house in question: