Fiends are loose in the city, and no girl or woman is safe! The latest victim is a 17-year-old high school girl–found naked and bound with her own underclothes, with a cigarette burn on her wrist–near the Union Pacific underpass at Willow Street. After treatment at Seaside Hospital, which revealed no sign of criminal assault, the shaken girl recovered sufficiently to describe being followed by a strange man and then grabbed in an alley, after which her memory was mercifully blank.

Police records show the same girl reported being followed by a man in a car with no license plates on February 5.

Remember Eugene White, the businessman who disappeared on Valentine’s Eve, leaving his coat, wallet, bloodstained car and gifts for the Missus? Police speculated he’d been robbed, beaten and tossed into a passing freight car, but it turns out he’s fine and well, and camped out with a pal in Seattle. It was the wife of that friend, Jay Stevens, who convinced White to phone his worried wife. She called the cops.

White explained that he was feeling overwhelmed after years of working 14 hour days, and so faked his own disappearance. “I felt I couldn’t go on. I wanted to go to sea or work in a lumber camp.” So he cut his hand with a razor and stage set his own abduction.

A shocked Mrs. White told reporters that if Eugene didn’t come home, she guessed she’d take the kids and go home to mama in Michigan. Then she asked to be left alone to figure things out.

Gifts for the missus. 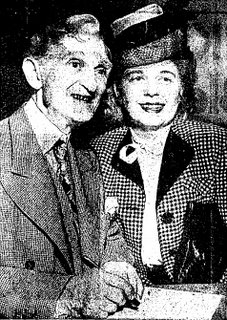 Juggling-act partners Elizabeth Reinke, 25, and Walter Beemer, 77, married in 1943 and divorced in 1946, stepped into judge’s chambers today to re-knot their troth. The lady explained, “It was not the same after our divorce. We both worried. It once caused him to drop an Indian club on my foot.” We hope the pair have many happy years ahead of them, with no broken toes in the forecast. 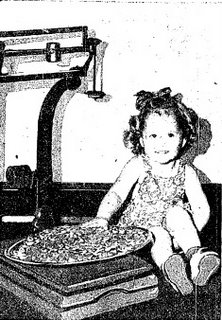 Little Patti Sue Roeder, stricken with polio before she turned two, has become the pet of the Textile Association of Los Angeles. The group vowed to donate the child’s weight in ten cent pieces to the March of Dimes. When she stepped onto the scale today, it read 33 pounds… and while the TALA had raised 37 pounds of coinage, they decided to let the difference slide. The total: $8700.

They’ve vowed to repeat the gesture in 1948, and Patti Sue promises to be quite fat when the next weigh-in comes. The girl lives at 620 S. Chester Street.

Perhaps an image of a house in Compton doesnâ€™t make you think of the March of Dimes, but who cares. Look at that curved entry canopy! 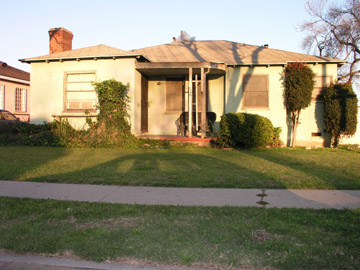 On a numismatic note, just last year the dimers had moved from using these-

Ten hours after the plating factory explosion on East Pico Blvd., 20-year-old Charles Batye turned on a machine at the creamery at 1120 Towne Avenue and was badly injured when a shard of glass, a by-product of the explosion, flew out and hit him in the left eye.

Funny, there was a creamery here yesterday. 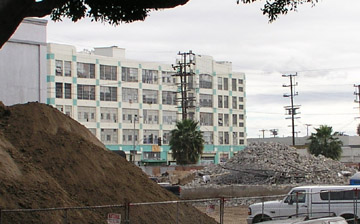 A message from our pal Jonathon at the essential L.A. Time Machines site, who is speaking at this March 18 event:
The group we are forming will focus on Los Angeles Restaurant History in general, with an emphasis on restaurant memorabilia collectors, writers on restaurant history and the oral history of classic restaurant employees and owners. Scheduled to speak at our first meeting are Jim Heimann, author of “Out With the Stars” and “May I Take Your Order”, as well as countless other books on Los Angeles and Pop Culture of the 30s to 70s. Also Charles Perry, the renown columnist for the Los Angeles Times and Food Historian. And Filomena D’Amore, owner of Patsy’s Pizza, whose father Patsy D’Amore owned the Villa Capri restaurant in Hollywood along with Frank Sinatra (and it was James Dean’s favorite place). Our first meeting is at the Hollywood Heritage Museum on March 18 at 10AM.
Most of this is on the attachment hopefully. The principal organizer is Chris Nichols who you might know from ModCom or LA magazine. 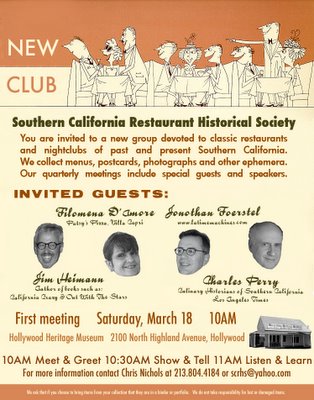 The city continues to reel under the horrific impact of yesterday’s chemical explosion at the O’Connor Electro-Plating Company, 926 E. Pico Blvd., which leveled the factory, damaged 116 homes, injured hundreds and killed more than a dozen persons.

City officials scattered rat poison around the blast site to deter vermin, while others condemned the contents of local restaurants and bakeries, lest glass fragments find their way onto plates. And into the night, the bulldozers made their silent, constant grab at the debris, dislodging severed limbs, dead cats and dogs, and the ruins of countless lives.

The aftermath of the explosion was carried live on local television station W6XYZ, with narration by reporter Dick Lane.

It is believed that staff chemist Robert Magee was experimenting with using volatile perchloric acid to polish aluminum when the blast occurred. The formula was his own secret recipe, and a patent had reportedly been applied for. Magee and his newly-hired assistant, Alice Iba, are both missing and presumed dead.