Our leaders may decry black-on-black violence, but they mistakenly discount diminuative pipe-wielding sexagenarian grandmothers. Weâ€™re yet to hear Glen Ford of Radio BC address that issue.

Miz Jessieâ€™s home has fallen to the Charles Drew Univeristy of Medicine,

but hereâ€™s the house across the street, which likely represents the lost character of the street.

Abandoned Oil Fields Are Unhealthy For Children And Other Living Things

After a lengthy search, the body of 4-year-old Bert F. Long was discovered yesterday in eight feet of water in an open sump hole in the oil field just half a mile east of the housing project where he lived with his parents and five-year-old brother.

It appears that Bert wandered out of his yard while his mother Ola May was at a dentist’s appointment, and his grandmother was tending to brother Johnny, who was sick in bed. Local drugstore operator T. R. McQuigg reported seeing a child who matched Bert’s description around 4pm Monday, but that was the last anyone saw of the child until two juvenile officers discovered the tiny floating corpse in the hole that had recently been drilled, but left uncovered, by oil line repairmen. Wilmington Hall, Rancho San Pedro, Banning Homes and Channel Heights housed 11,000 defense industry workers in the Harbor area. They were, as further described, “bombproof” and “will also stand up against the ravages of earthquakes, contractors say”…that may have been, but in January 1954 Mayor Paulson applied to the Public Housing Administration for Banning’s demolition. (This was the time, after all, when subsidized housing had taken on the dreadful taint of Communism…an epithet thrown at Frank Wilkinson when he worked on putting Neutra’s plans for Chavez Ravine into action, and we all know how that turned out.) The Times changed its tune regarding warchitecture’s permenance; regarding Banning Homes, they wrote: “The temporary dwelling structures were constructed in 1943 as shelters for war workers and provided 1597 apartment units…” Homes for seniors were considered, as was a school, so of course the property was rezoned industrial; returning a Federal property to the tax rolls was of primary importance to Vincent Thomas and his boys on the COC.

Oh, and the Longs?

NEWSFLASH FRIDAY 1/13 9am: We have 2 last minute openings on the Sunday 1/15 Crime Bus. These are only available to on a first come first served basis to someone who checks their email frequently and can make immediate payment by paypal ($49.74) if told that the seats are being held for them today. Preference will be given to people who want both tickets as opposed to a single. Is this you? If so, email amscrayAT gmail DOTcom promptly, and await further instructions.
***
We now sold out for both days of January’s 1947project Crime Bus tour, but if you’d like to be on a future tour, please sign up for our mailing list.

On the Crime Bus, each $24 ticket entitles you to a guided 5-hour bus tour through fascinating and forgotten Los Angeles crime, social and architectural history– including a thorough debunking of the Black Dahlia myth machine courtesy of BD researcher Larry Harnisch– on the weekend of the 59th anniversary of Elizabeth Short’s murder. You’ll also get a CD of a rare 1950 Black Dahlia radio play, and a chance to connect with fellow LA history fiends. 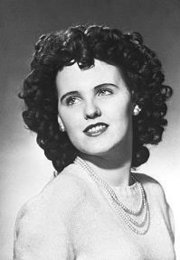 The Case of the Dolt on the Bumper

Driving home to 1572 W. Seventh Street with his wife, Frank R. Cross heard a weird rattle in the car.

“Honey,” said Frank, “You take the wheel, and I’m going to just hop up on the bumper and see if I can figure out what’s going on.”

“But Frank, I can’t! You know I haven’t driven a car in eight years!”

Frank insisted, and so they stopped, swapped, and hubby hopped up on the bumper… and promptly disappeared. Mrs. Cross heard a bump, but not a rattle, and drove on for a spell. Then she wondered if the bump might have been Frank, so she stopped–fortunately, since the bump named Frank was being dragged beneath her wheels.

Mr. Cross is in Seaside Hospital tonight with multiple injuries, his condition listed as satisfactory.

Snaring Pigeons in the Park

The day began with two elderly men and a flock of pigeons, all enjoying the breeze in Ocean Park. It ended with one man in police custody and another dead on the sidewalk, a horrified widow and the pigeons frightened away. Madness, sleepy Santa Monica-style.

Harry Jacoby, 53, of 216 Ashland Ave. vehemently objected to 68-year-old watchman Charles LeRoy Bonner of 2829 1/2 Ocean Front’s attempts to snare pigeons in the park. After it was all over, Bonner told police that the younger man had twice tried to start a fight over the snaring, knocking Bonner down and then smashing his glasses.

Finally, Bonner fought back, and the two men grappled across the sidewalk. They fell together, but only Bonner got up. Harry Jacoby was dead on the ground, and Charles Bonner taken into custody on suspicion of murder. Mrs. Jacoby became hysterical at the scene and had to be restrained. And above them all, the pigeons wheeled, now careless and oblivious to the tiny men below.

She Got A Bad Wrap

The motive: acquiring fancy duds, to the tune of $1479 retail. Judge Edwin L. Jefferson ruled that the girl be held in County Jail, as she was unable to meet a $2000 bond.

We direct our readers to information on an event hosted by the LA Press Club in Hollywood on Thursday, a reading and reception for Donald H. Wolfe’s new book The Black Dahlia Files: The Mob, the Mogul, and Murder that Transfixed Los Angeles

The 1947project bloggers have not yet read Mr. Wolfe’s book, but our Larry Harnisch has thoroughly examined the D.A.’s files that form the heart of Wolfe’s thesis. He is concerned that there are numerous inconsistancies between the files he read and Wolfe’s claims (see below). Still, it sounds like an entertaining night out in Miss Short’s old stomping grounds, and we invite any reader who attends to post back in the comments about their experience.

Larry says: Having been through the D.A.â€™s files on the Dahlia case (I inventoried and indexed every scrap of paper) I can say definitively that Bugsy Siegel, Norman Chandler, Jack Dragna and Brenda Allen are never mentioned.

I chatted with Wolfe while he was going through the files at the D.A.â€™s office so I know he had the opportunity to find those documents. He apparently just ignored them.

The D.A.â€™s files, incidentally, arenâ€™t some neat archive. Theyâ€™re papers that were saved when the D.A. was cleaning house and were just shoveled into boxes. Material from different cases is mixed up, including unlabeled photographs from other murders that got put into the Dahlia materialâ€“at least one turns up incorrectly identified in a certain â€œtrueâ€ crime book.

Siegelâ€™s voluminous FBI files are online at the bureauâ€™s FOIA site. They are heavily censored but show he was under virtually constant surveillance from at least the middle of 1946. Agents saw him (and Virginia Hill) move out of the Chateau Marmont and into the house on Linden on Jan. 14, 1947, and files say he and Hill left for Palm Springs the next day. I refer specifically to FBI document 62-81518-406 and surrounding material.

I just got the book and havenâ€™t read it yet as Iâ€™m getting ready for the Crime Bus tour this weekend, but anything that relies on â€œSevered,â€ which is 25% mistakes and 50% fiction, cannot be trusted. Iâ€™ll put on my waders and slog through this opus when I get a chance.

While Mom and Pop Are Away

A teenage party at 4156 Rosewood Ave. went terribly wrong tonight when 15-year-old Alan Jerome Gordon was accidentally shot by Edward Eisenhart, also 15, and Gordon’s closest pal. It seems Loraine Collins, 14, brought her daddy’s automatic pistol to Marcia Bronstein’s soiree, and handed it over to Edward. Edward went to demonstrate the safety mechanism, after removing the clip, and squeezed off one unlucky bullet. “I’m shot through the heart,” cried Alan, who died.

Police were called and got to hear a fanciful tale of a mysterious prowler who’d climbed through the window, killed Alan and run off, but the truth soon came out.