The Case of the Tipsy Toddler? 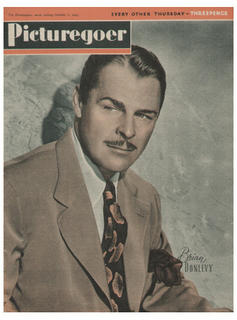 Songbird Marjorie Lane Donlevy’s February divorce from actor Brian Donlevy is not going well. In fact, the lady has filed to have it voided.

She claims that last December, the actor–who when he wasn’t ignoring her talked constantly of divorce– suggested she go to New York. While in the east, she met and was wooed by James Hannan, who shocked her with an almost immediate proposal of marriage. She succumbed to his attentions.

During her travels, Donlevy kept their 4-year-old daughter Judith in an unknown location, and refused her access to the child. Soon he revealed knowledge of her affair with Hannan (and possession of compromising photographs), and used that information to force her to consent to a “grossly unfair” divorce decree, lest he take the photos to the newspapers.

Mrs. Donlevy now believes that Mr. Hannan’s woo was being pitched at the behest of her ex-husband. Further, she denies the claim of her daughter’s nurse that the child once drank a glass of gin that was sitting unattended on a table within her reach.

There will be a hearing in Superior Court Judge Fred Miller’s court on Monday. For now, Miller has ordered Donlevy to pay $2100 in his ex-wife’s legal expenses.

Further viewing: in 1947, Mr. Donlevy appeared in Kiss of Death… and in The Trouble with Women (which is not available on DVD)