Another soul goes free, cont.
A piece of a Delaney & Bonnie & Friends song would not stop playing in my head. It was the soundtrack to various tapes of painful and shameful moments from my life.

The Return of Manny Chavez
Manny is often homeless, and yet owns 25,000 records.

Luv is…
Sure he’s a bit forward for the first date; straight shooters like Tom often have rough edges.

The architecture of chance
Of course, when planes crash into churches called Pillar of Fire and then wheel into local funeral homes, one wonders if some higher preservationist is pulling the strings.

beautiful paranoia
If you grew up with nightmares of mushroom clouds like I did, even though it was the seventies, you could get behind this article threading the abstract expressionists to cold war propaganda. 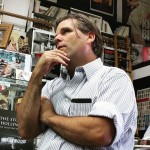