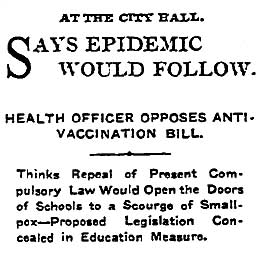 Showing once again that Los Angeles is out of touch with Sacramento, local health officials are fighting an education bill that would lift mandatory smallpox vaccinations for schoolchildren.

Vaccinations were opposed for several reasons in the Legislature. Assemblyman Sackett said the law unfairly placed the burden of enforcement on schools. Assemblyman Percival, a Christian Scientist, apparently objected to the measure on religious grounds. Other opponents said the only reason health officials supported the shots is to protect their jobs.

â€œPeople do not realize what the repeal of the compulsory vaccination law would mean,â€Â says health officer Dr. Powers. â€œIf that law were not in force here we should need five health officers in place of one.â€Â

â€œThose who question the efficacy of vaccination would do well to look over the records of the local health office and compare the amount of contagious disease 15 years ago with what exists today,â€Â Powers says. â€œOur population is five times as great as it was then but there has been no increase in smallpox. To repeal the compulsory vaccination law means to invite a scourge of smallpox to come north from below the Mexican border and sweep the state.â€Â

The Times notes that Powers and his aides are watching trains and hotels for visitors from Chicago, which has been suffering epidemics of diphtheria and scarlet fever. The anti-vaccination bill was defeated in February 1907. 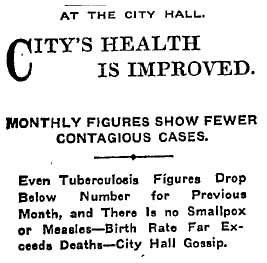 Henry Sief of the health office has released the latest figures on infectious diseases in Los Angeles and the news is wonderful.

There were only 20 cases of diphtheria in August, a 31% decrease from the 29 cases in July. Scarlet fever was down to 9 cases in August, a 55% drop from July, when there were 20. Tuberculosis is down to 10 cases from 24.

Typhoid, however, is on the rise, with 15 new cases in August, compared with 12 cases in July.

Mathematical problems, alas, prevent us from knowing the exact mortality figures for August 1907. The Times reports that deaths included 61 Los Angeles natives, 163 people from Pacific Coast states and 251 from elsewhere in the U.S., then gives the total of 328 as opposed to 475. Sixty-one people, or 12.8 percent, died of tuberculosis, The Times says.