Comes the season when the people who put up with you all year begin to make subtle and not so subtle suggestions that they expect to be compensated for this. Are you going to be one of those bad dads or dull honeys whose gifts end up in the hall closet, only to be regifted in some humiliating Secret Santa scenario? Or are you going to listen to your pals from 1947project, and make the holidays a little more interesting?

Or do their tastes run more towards Continental miseries? If so, Luc Sante’s new translation of Felix Fénéon’s Novels in Three Lines will pique their schadenfreude. Fénéon was a fascinating Parisian character who, as a sideline to his involvement with bomb-throwing anarchists, editing of Rimbaud and Lautréamont and discovery of Georges Seurat, contributed an extraordinary series of brief criminal and oddball news stories to the daily paper Le Matin in 1906. Imagine one of the more complex 1947project tales compressed down to its suggestive essense and you have Fénéon’s evocative and poetic formula. Sante’s elegant translation captures the poignancy, mystery and eternal grace of the otherwise forgotten traumas of one hundred years ago.

Cuddle up together and cock yer ears to the sounds that made great-grandad guffaw: Actionable Offenses: Indecent Phonograph Recordings from the 1890s,  featuring "The Tapeworm Story," "The Virtues of Raw Oysters" and "Learning a City Gal How to Milk." Or read aloud from The Black Lizard Big Book of Pulps: The Best Crime Stories from the Pulps During Their Golden Age, The ’20s, ’30s & ’40s, which has short stories by recognized masters Chandler, Hammett, Cain, Gardner and Wollrich, and some newly unearthed rarities. 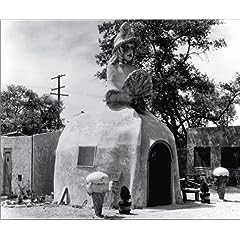 If it’s images of early Los Angeles that scratch your dear one’s itch, there are some fine new books to suit, among them Marc Wanamaker and Robert Nudelman’s Images of America compilation Early Hollywood and Sam Watters’ two-volume Houses of Los Angeles, for which you can pick your period poison: 1885-1919 or 1920-1935. (And you already gave ’em a copy of California Crazy and Beyond: Roadside Vernacular Architecture, right? Of course you did!)

Then, too, you might wish to patronise the works of our 1947project contributors, like Nathan’s Los Angeles Neon or Lynn’s College Girls: Bluestockings, Sex Kittens, and Co-Eds, Then and Now or Kim’s Neutral Milk Hotel’s ‘In the Aeroplane Over the Sea.’ Or get two of us in one go by picking up Taking Things Seriously: 75 Objects with Unexpected Significance, Josh Glenn and Carol Hayes’ anthology of things and their stories from the collections of Kim, Lynn and 73 other deranged hoarders, among them Bill "Zippy" Griffith, James Kocholka, Lisa Carver, Thomas Frank, Tony Millionaire and Luc Sante. None of whom is the owner of the book’s most popular object, Christopher Walken’s bagel.

Or give ’em an Esotouric gift certificate, one, two, three or four seats aboard the most interesting bus tours in the Southland, and a Raymond Chandler Mystery Map by which to plot noirish adventures of their own. Or engage Crimebo to Clown to come over and put on a "private" show! And if you’ve ridden the Esotouric bus this year, don’t forget we’ve got a 2-for-1 seat offer on the James M. Cain tour on 12/15.

But whatever objects or adventures you exchange this season, it’s our sincere wish that the year’s end ushers in a time of peace and contentment for you, yours and all of ours. Thanks for reading, and take good care.